And here we are... the last day of July! I am really glad I've had this project to keep me grounded and focused, slowly but surely adding one book every day. And I still have so many books that I've bookmarked and will keep on sharing as August begins. You can see the previous weekly round-ups with these links: May - June - July.
This week, the theme was anthologies that bring together stories from different parts of Africa:
African Dilemma Tales
by William Bascom 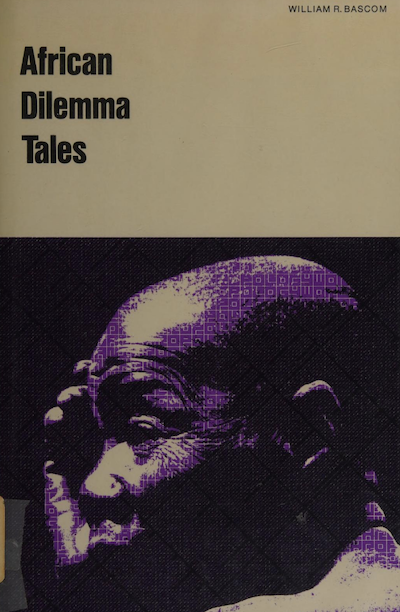 Yes and No:
The Intimate Folklore of Africa
by Alta Jablow 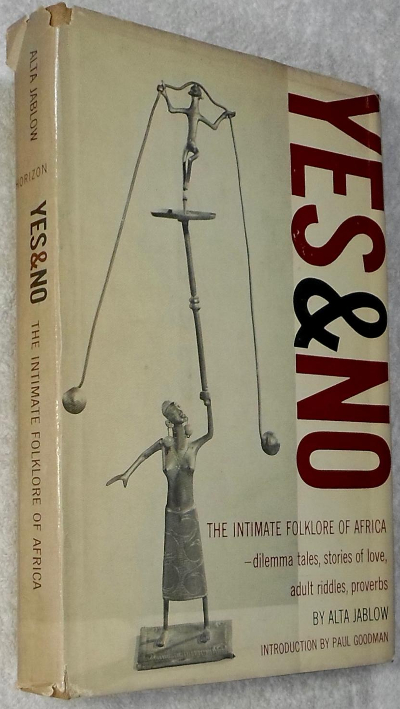 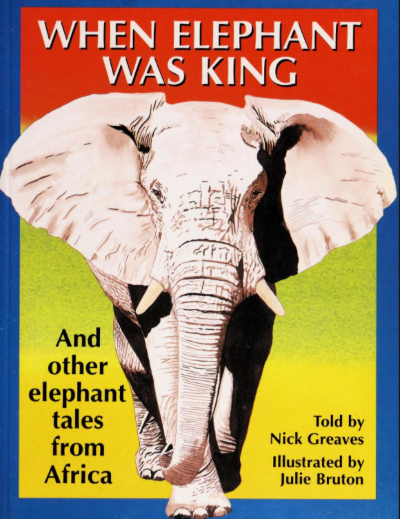 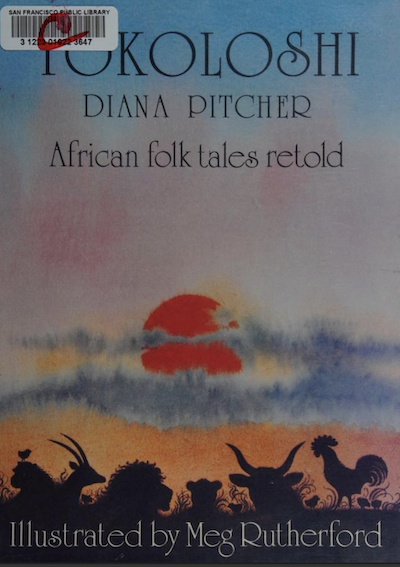 The King's Drum
and Other African Stories
by Harold Courlander 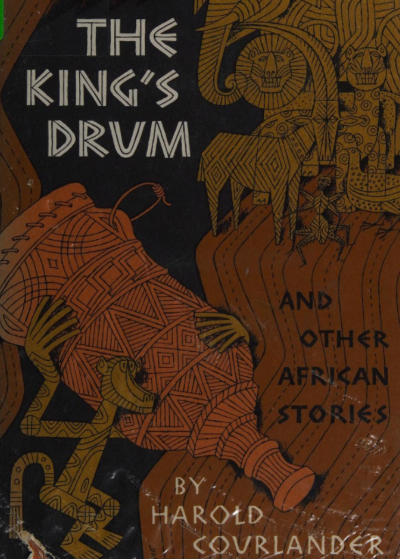 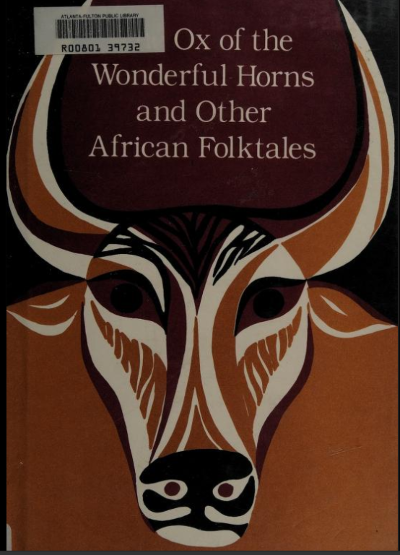 African Folktales at Internet Archive: The Ox of the Wonderful Horns

It's been a while since I've shared a book by Ashley Bryan, so I wanted to make sure to include one of his books during this week of anthologies, and I chose this one: The Ox of the Wonderful Horns and Other African Folktales... a lovely book that is just a click away at the Internet Archive. 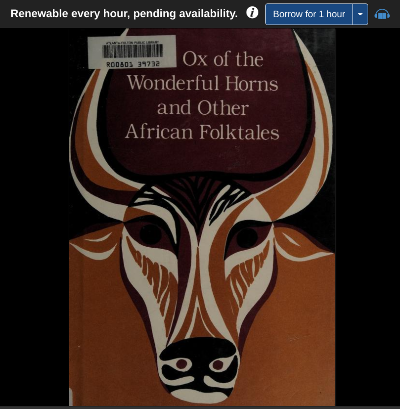 Here are the stories you will find here: Ananse the Spider in Search of a Fool (an Ashanti story from western Africa); Frog and His Two Wives; Elephant and Frog Go Courting (these two are from Angola); Tortoise, Hare, and the Sweet Potatoes, and The Ox of the Wonderful Horns (these two are from South Africa). Don't those all sound great? And of course I am happy because they are all stories with animal characters.

Ashley Bryan wrote the text and he did the marvelous illustrations. This is Tortoise and Hare: 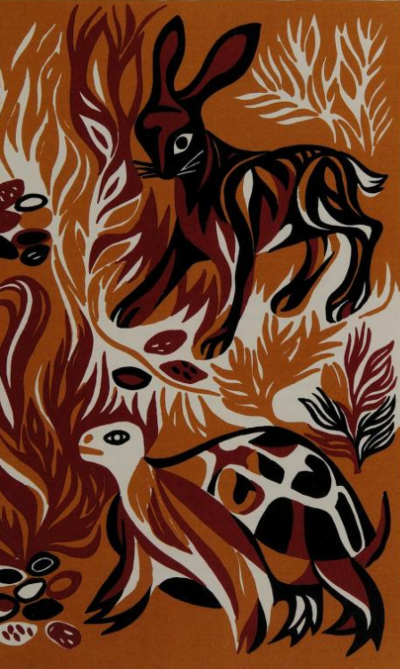 And here you see Frog and Elephant: 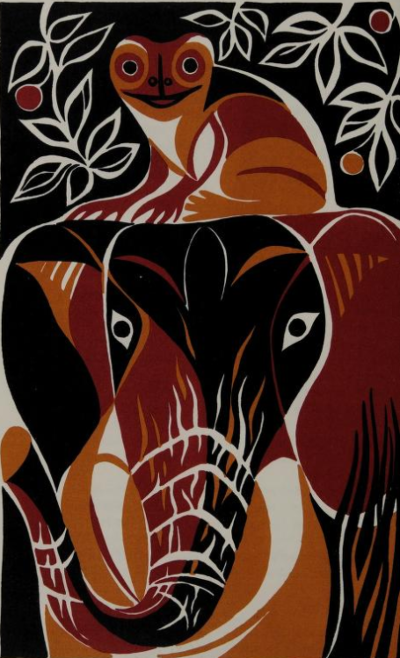 The Ox of the Wonderful Horns
and Other African Folktales

For today's anthology, I wanted to return to one of my favorite story collectors, Harold Courlander, and his book The King's Drum and Other African Stories, which is just a click away at the Internet Archive. 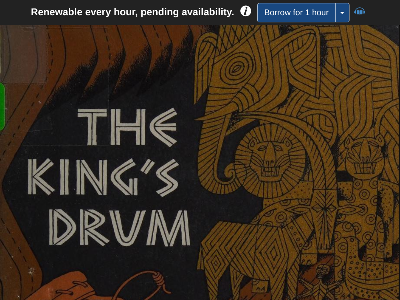 This book contains 29 stories from a wide range of different African storytelling traditions. Be sure to check out the notes in the back of the book for each story; Courlander often includes variant stories for comparison and his notes are always fascinating.
The illustrations are by Enrico Arno, who contributed artwork for other Courlander books also. Here's his illustration for the famous story of the Moon's message, this time with grasshopper and rabbit as the two messengers: 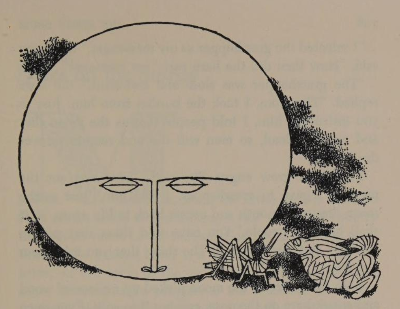 And here's the illustration for the story of the hunter and his talking leopard: 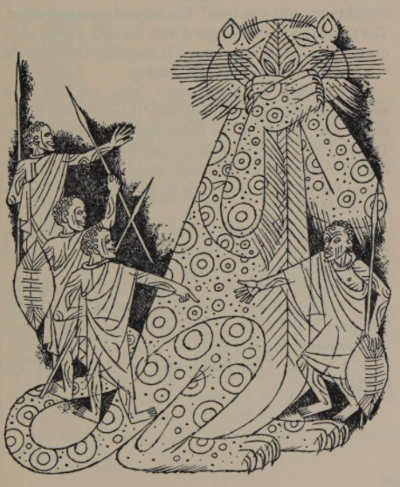 You can find out more about Courlander in this earlier post: Treasury of African Folklore, and also here:  Ijapa the Tortoise, and Other Nigerian Tales, which also features illustrations by Arno. Plus there are yet more Courlander boos yet to come!
Meanwhile, for today, this African storytelling panorama awaits you at the Archive!
The King's Drum and Other African Stories
by Harold Courlander

For Week 11, I'm featuring anthologies (see Week 11 all on one page), and I knew I wanted to include this anthology of stories for children: Tokoloshi: African Folktales Retold by Diane Pitcher, just a click away at Internet Archive. 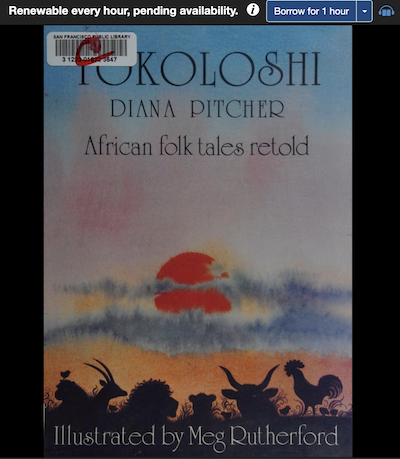 The stories come mostly from Bantu-speaking peoples from southern and also central Africa, although there are some stories from eastern Africa and from western Africa too. Diane Pitcher is herself from South Africa, and she has used a Zulu framework to tie the stories together, with Zulu names for the characters, as she explains in the introduction.
The illustrations by Meg Rutherford are lovely, and, as you can see, the hare is an important character here, which makes me happy: 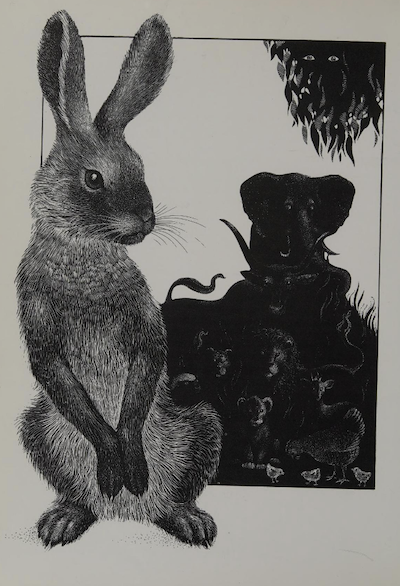 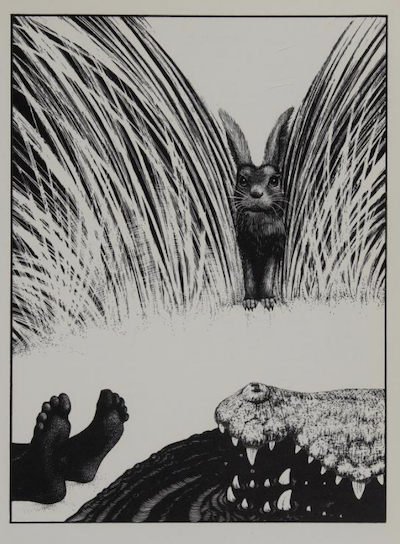 The title character of the book, Tokoloshi, is a South African goblin-like water sprite, and you can read more about him at Wikipedia. It is because of Tokoloshi that I picked this book in particular. I just finished writing an interactive Twine game about cryptid characters, and I included Tokoloshi in the cast of characters; if you like Twine games, you can play the game here: Cryptid Encounters.
Meanwhile, for Tokoloshi and other storytelling delights, take a look at Pitcher's book, courtesy of the Internet Archive:
Tokoloshi:
African Folktales Retold
by Diane Pitcher

African Folktales at Internet Archive: When Elephant Was King

I shared some dilemma tale books by Bascom and Jablow so far this week, and today I want to shift back to animal tales (my favorites), starting with this book by Nick Greaves: When Elephant Was King and Other Elephant Tales from Africa, and the book is just a click away at Internet Archive. 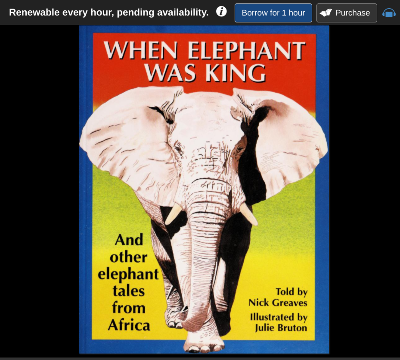 There are 25 different stories with elephants here, including stories from all over Africa. There are also some introductory chapters with zoological facts about elephants along with different cultural beliefs and superstitions.
The illustrations in the bookare by Julia Bruton. There are lots of elephants, of course, like this one: 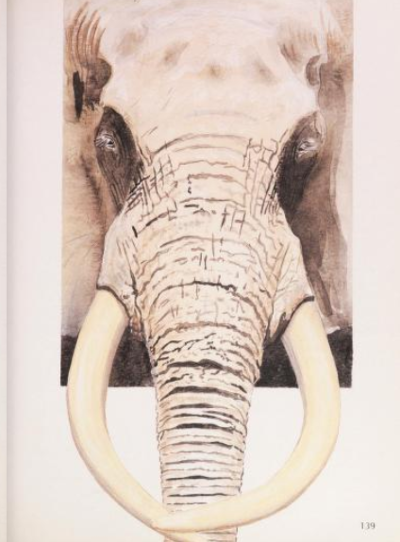 Plus other beautiful drawings like this one of the hare: 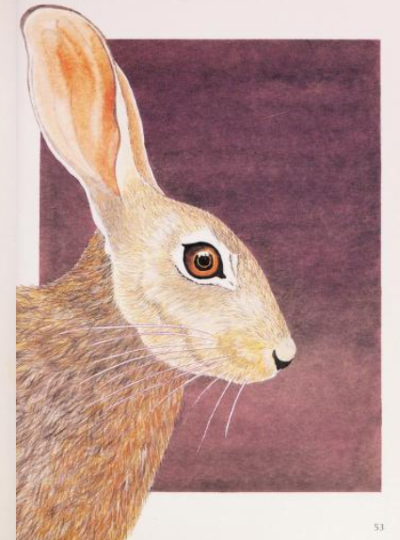 And this two-page spread of the buffalo: 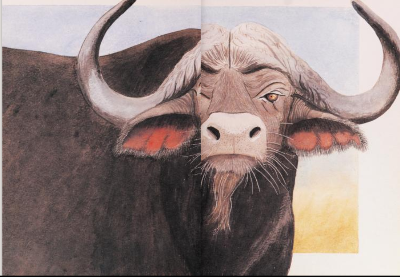 When Greaves published this book (first edition in 1996 and then revised in 2000), the elephant population had gone down from 1.3 million elephants in African in 1979 to just half of that in the late 1990s. Those numbers have continued to decline; you can read more about that in this World Wildlife Fund article from 2018: The status of African elephants.
I've written about Nick Greaves before; here's a blog post about his book When Lion Could Fly, and you can also find out more at his website: NickGreaves.info.
When Greaves wrote this book, he did so hoping to support elephant conservation, and that need is even more urgent today. So, you can use this book both to learn about the actual elephants of Africa, and also the stories that have been told about them all over the continent.
When Elephant Was King
and Other Elephant Tales from Africa
by Nick Greaves

Yesterday I shared William Bascom's book with hundreds of summaries of dilemma tales, so today I wanted to share a book with some wonderful dilemma tales told in detail: Yes and No: The Intimate Folklore of Africa by Alta Jablow, just a click away at Internet Archive. 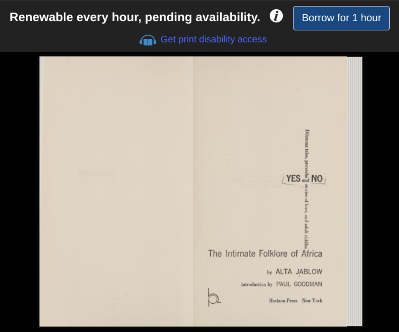 The book contains 25 dilemma tales, along with about a dozen love stories also, plus proverbs and riddles too! Alta Jablow lived and worked in Liberia in the 1950s (her husband worked for UNESCO), and she used some of the stories she collected in Liberia in this book. Jablow does not provide bibliography story by story, but she does indicate the tribal tradition for each story, and you can find a list at the end of the foreword to the books she used as her sources.
For the dilemma tales and love stories, she has multiple stories from the Fan, Hausa, Vai, Bura, Ibibio, and Bakongo storytelling traditions, along with about another dozen or so traditions that are represented by one story. The proverbs and riddles also come from a wide variety of sources, and the riddles are so much fun; here's a Yoruba riddle: The master is inside the hut, but his beard remains outside. I'll put the answer down at the bottom.
So, whether you are interested in proverbs OR riddles OR love stories OR dilemma tales, you will find something to enjoy in this book.
Yes and No:
The Intimate Folklore of Africa
by Alta Jablow

Answer to the riddle: FIRE, whose smoke escapes through the thatch of the hut.
at July 26, 2021 No comments:

Since I couldn't decide what area to focus on this week, I decided to do another week of anthologies that bring together stories from different parts of Africa, starting with this book about one of the most distinctive forms of African storytelling: African Dilemma Tales by William Bascom, just a click away at the Internet Archive. 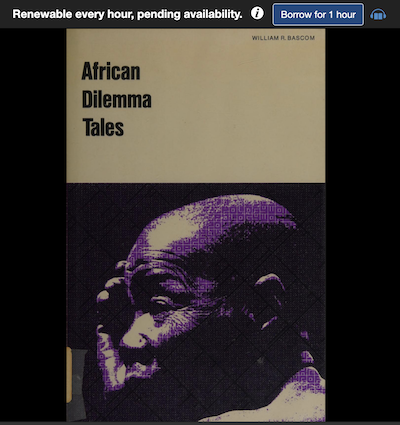 This fabulous book provides detailed summaries of 168 dilemma tales from all over Africa, many of which appear in multiple versions. There is also a very helpful introduction that gives an overview of this type of story in which the audience participates at the end, debating the answer to a question about the story, such as which character was the wisest or bravest, etc., or else debating about how the story should end based on ethical or moral considerations. They are sometimes called "riddle tales," but unlike a riddle, the dilemma tale does not have a correct solution. Instead, the idea is that the dilemma offers members of the audience a chance to develop their thinking skills and also their ability to explain their thinking to others.
For each story, Bascom provides a summary along with information about the source of the story, plus a detailed bibliography in the back if you want to follow up on the story. For many of these stories, there is no published English version of the story, so Bascom's book becomes even more valuable for English-language readers.
Just to give you an example, here's a typical summary:

As you can see, even though the stories are just given in summary form, they are fun to read, and literally hundreds of them await you here in Bascom's book! You can also find more books by Bascom at Internet Archive, including his books about Ifa divination and about the Yoruba of Southwestern Nigeria. You can find out more about his work and career at Wikipedia.
African Dilemma Tales
by William Bascom

Each slide has a link to a notes page with more information; link to full size display.