ABC 4. When the Stones Were Soft

This week we start the last book for May (see all the May books), and each month the last book is a longer collection of stories (but still under 100 pages). For this last week of May, it's a book of east African folktales retold by Eleanor Heady: When the Stones Were Soft: East African Fireside Tales. There are 14 stories in the book, and maybe you will want to tweet your favorite story; if you do, use the hashtag #AnansiBookClub so others can find you. 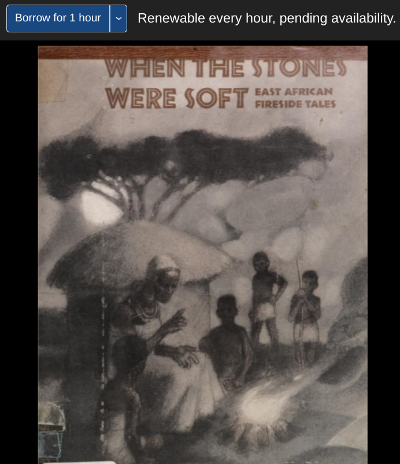 The beautiful illustrations are by Tom Feelings, and I'll have more to say about him and his work later this week. Here's his illustration for "The Rugmaker" (more about that story below). 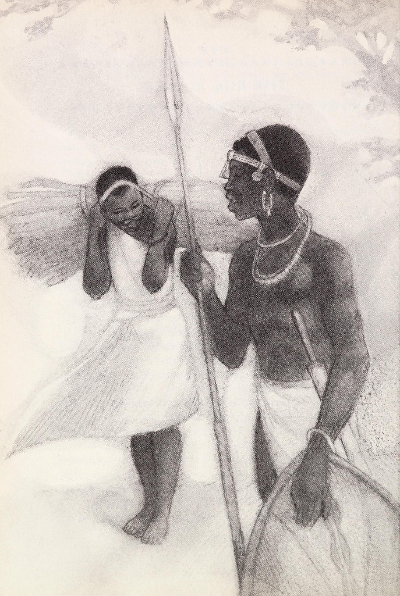 Eleanor Heady [1917-1979] traveled to Africa in the late 1950s with her husband, Harold Heady, a forester and ecologist. She collected stories during their travels, and went on to publish two books of east African folktales: When Stones Were Soft and also Jambo, Sungura! Tales from East Africa which is also available at the Internet Archive. The title of that one means "Hi, Rabbit!" as Sungura is the Swahili name for the trickster rabbit (hare), and in When the Stones Were Soft, Heady also uses the Swahili names for all the animal characters, so the hippopotamus is Kiboko, the elephant is Tembo, and so on. 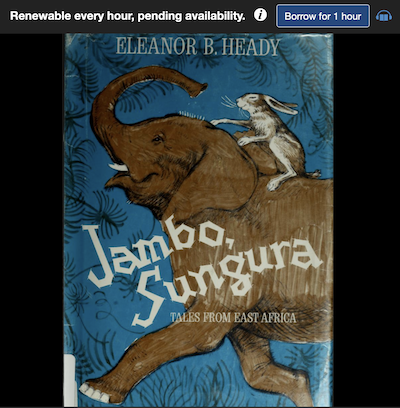 In this post, I'll share some of my favorites from When the Stones Were Soft, starting with the "The Rug Maker," which is a wonderful sort of fairy tale, but without talking animal, without magic... just a very sweet human drama. And I'm not the only one captivated by this particular story; I was so excited to see that the Internet Archive has an old video from 1970 with an animated version of the story. That's when I was in elementary school, but I don't remember seeing this animated film; I wish I had: that might have excited my passion for African stories at an even younger age. Here is the video: The Rug-Maker.
Another story I really liked is about the "namashepani" who are the little people as found in so many different cultures. The namashepani steal grain from people's grain baskets, and if you confront them, well... be careful! The story gives you good advice about what to do if one of the namashepani ever engages you in conversation. I have not been able to find this word (a Swahili name?) used elsewhere, so if anybody has some insight, please let me know! I found a word "kishetani" (from Arabic "shaitan") used to refer to malevolent spirits, but not necessarily tiny ones. I found a great reference list of African terms for these folkloric little people, but "namashepani" was not on the list. 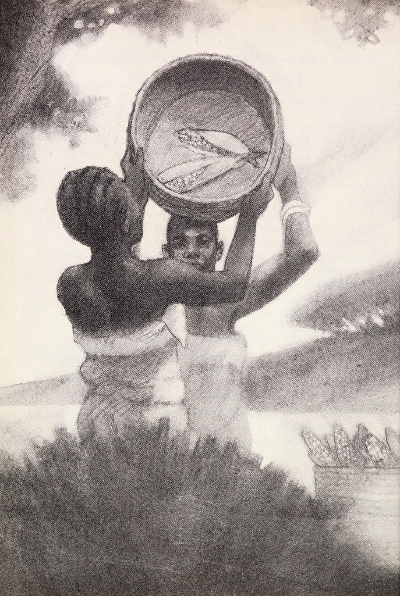 Another one of my favorite stories in this book is an aetiological story about cats: Why Cats Live With Women. There's also a similar story about dogs (Why Dogs Live With Men), but I like the cat story best! Paka, the cat, decides that living alone is not a good idea and seeks a companion: the cat's companion must be brave and strong. First Paka goes to live with Sungura, the hare, but finds out that Sungura is afraid of Mbweha the jackal. Then Paka lives with Mbweha but finds out that the jackal is afraid of.... I don't want to give it all away, but suffice to say: the cat ends up living with women, just as the title promises. (The story about the dog is also about finding a strong companion but it follows a different logic than the cat story; instead of one animal ceding to another ceding to another, in this story, it turns out that all the animals, no matter how powerful, are afraid of the man.)
I really like this type of chain tale based on a contest formula going from one episode to the next to the next as the cat seeks the strongest companion. You can see this formula in other contexts too like the Indian story of the mouse seeking the strongest husband, an ancient story that goes all the way back to the Panchatantra of over 2000 years ago: The Mouse Who Was to Marry the Sun.
And here is Tom Feelings' lovely illustration for this one: 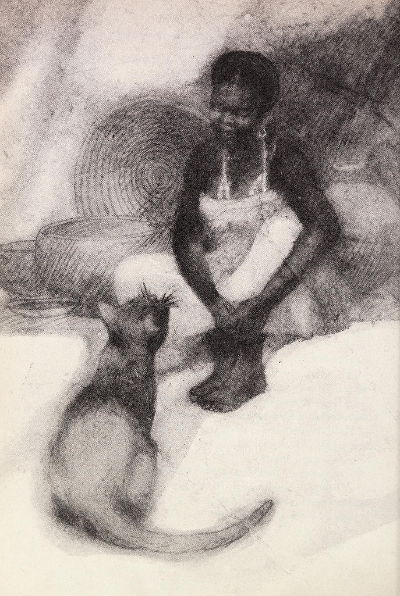 There's another aetiological story that I really liked: The Cattle Egret. The plot is a familiar one from many African folktales: there's a drought, and an unexpected hero, the egret, manages to find water for the other animals. There's a great plot twist at the end, and the result is the cattle egret as we know him today. You can read more about cattle egrets at Wikipedia. Here's Tom Feelings' drawing: 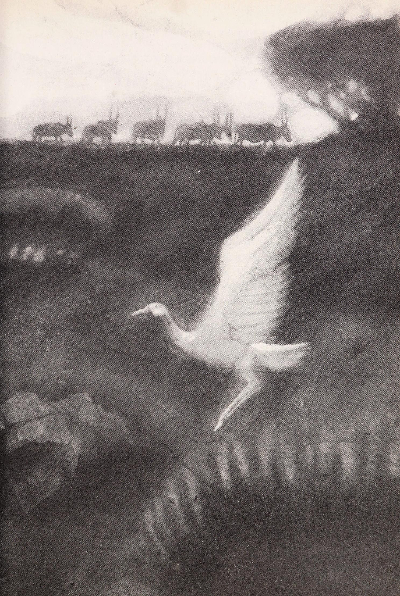 And here's an actual cattle egret! 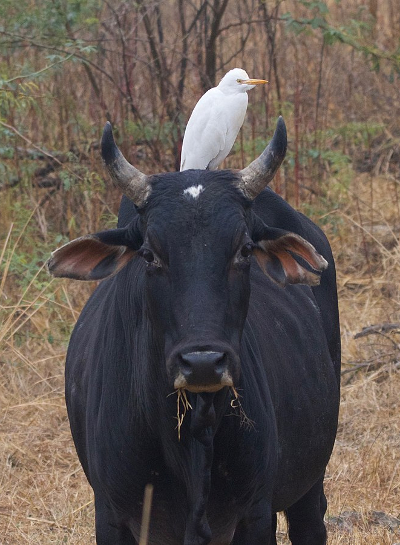 It was hard to choose one last favorite story to add to this post for the week because there are so many great stories in here... but I decided to choose this one about the lion-in-the-trap because it is such a famous African folktale type, although it is told here with warthogs, and I have not seen a version with warthogs before: The Trap. It's likely that this story came to Africa from India (and eastern Africa was very much a point of contact with storytellers from India); you can see a collection of folktales of this type at Dan Ashliman's website: Ingratitude Is the World's Reward. In this version, it is the wise Mrs. Warthog who manages to trick the lion into getting back into the trap! Here is Tom Feelings' illustration: 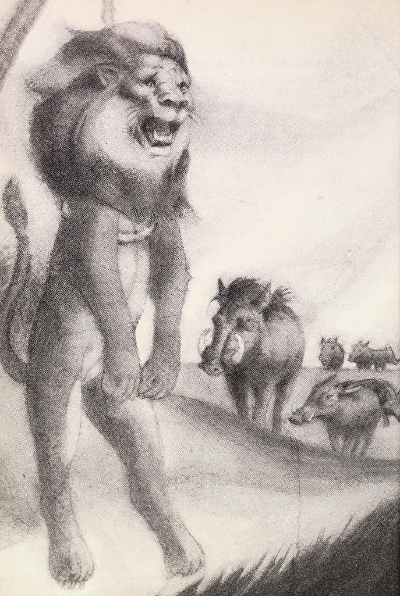 You can find out more about the brilliant illustrator, Tom Feelings, at Wikipedia. A great way to get to know his work is through these two books that he illustrated, written by his wife (at the time), Muriel Feelings:
Jambo Means Hello: A Swahili Alphabet Book 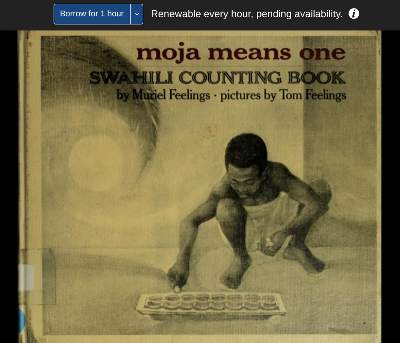 So, maybe you'll want to watch the video, or jump into the book and read that story, or read any of the other stories... and I'll be back each day in the coming week to add some more information and resources to this blog post. Enjoy!
When the Stones Were Soft: East African Fireside Tales
by Eleanor Heady 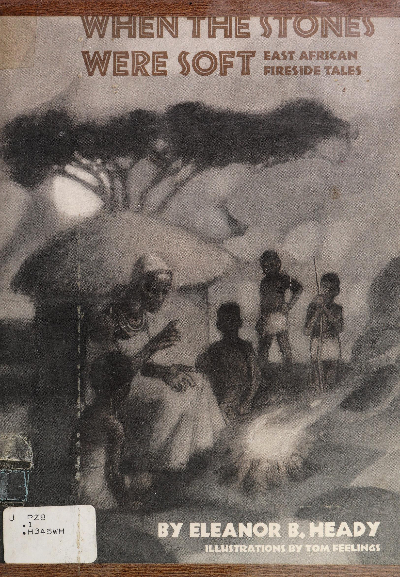 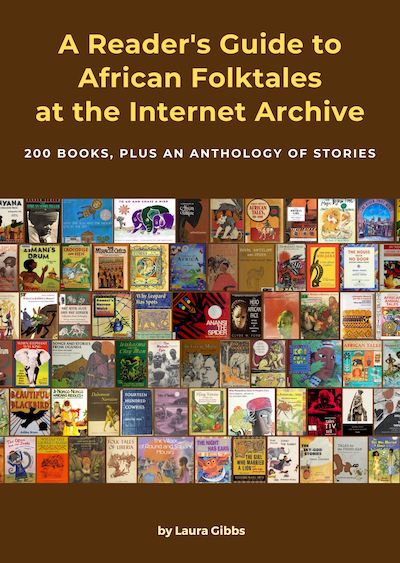