ABC 27: The Ogress and the Snake

It's already time for the final book on our November calendar for Anansi Book Club, plus you can see all the Book Club posts at this blog (and additional information also about previous months). So, today we're starting a collection of Somali stories told by Elizabeth Laird based on her work with Somali storytellers in Jigjiga, the capital city of the Somali Region of Ethiopia: The Ogress and the Snake, and Other Stories from Somalia. 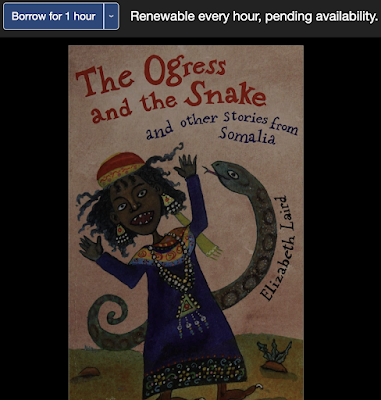 There are 9 stories in the book from 6 different storytellers, 2 of them women and 4 of them men. The illustrations are by Shelley Fowles, an artist from South Africa now based in the U.K.
I'll start with the story that gives the book its title: The Ogress and the Snake, a story that Laird heard from a woman named Hukun Hussein Fura. This is a great fairy-tale type of story with strong women characters: five sisters who stick together and a surprising female ally too: this girl who is herding sheep. You can find another story from this same storyteller at Laird's Ethiopian Folktales project online: Don't Be Too Shy. 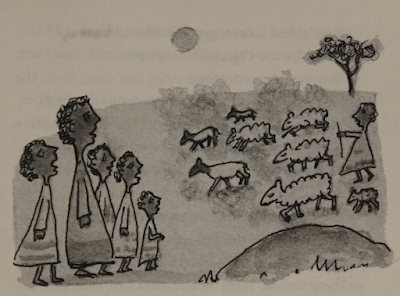 Next up: a wonderful pair of stories that Laird heard from Abdul Hakim Abdulahi Jibril, a teacher at Koranic school in Jigjiga. The first is How the Cat Became Woman's Friend. You might recognize this story from a version in the collection of tales from Swahili storytellers, Heady's When the Stones Were Soft, that we read back in May. The cat is looking for the strongest creature to be its friend. I won't give away the whole sequence but, as you can guess from the title, the woman turns out to be the strongest of all! Here's an illustration where the cat has allied with the lion, but is about to find out that the elephant is stronger than the lion! 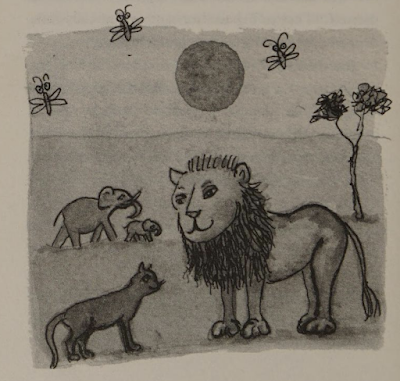 Then, in How the Dog Became Man's Best Friend, things start when Adam was expelled from the Garden of Eden, so that is very different from the dog story in Heady's book. I don't want to give away the plot but again from the title you can guess that of all the animals, it is the dog who befriends Adam. Read the story to find out why all the other animals keep their distance: 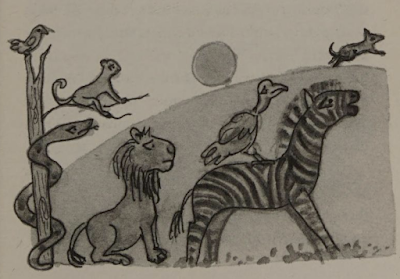 Plus you can find two more stories from this same storyteller at Laird's Ethiopian Folktales project online: The Clever Woman and the Sheikh Who Makes Mistakes and The Handsome Boy’s Dream.
One of my favorite stories in the book is a long, elaborate fairy-tale type of story with animal helpers: The Good Prince, which was told by Abdulrahman Abdulahi, a cloth merchant in Harar. One of the helpers it the Great Whale of the sea! The whale gets a two-page spread as you can see: 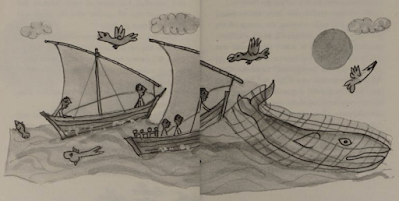 I've got two more animal stories I want to share today! Deya Ali and the Thieves, told by Aisha Awadem, is about a fox, Deya Ali, and the fox's friends include both animal and inanimate objects. For example, a sack of coffee beans is an actual character in the story. So if you're looking for a story about Ethiopian coffee, this is the one to read! You can find Another Fox Story told by Aisha Awadem at Laird's website. 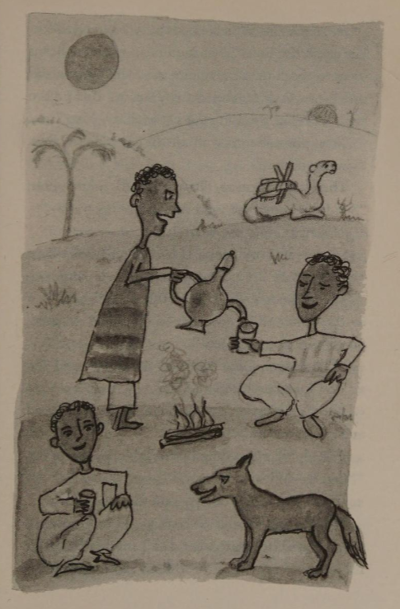 Another great animal story is about Raven, who was the messenger of the sky-god, the sun Wak. This story was told to Laird by Professor Ahmed Mohammed Ali; it's an aetiological tale about how the raven acquired his black feathers. Here you can see the other birds who are characters in The Sun and the Raven: 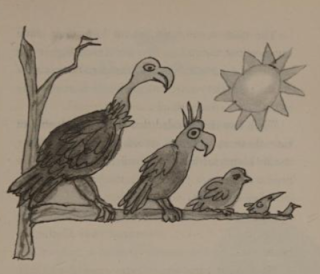 Professor Ali also told this fantastic story: The Miraculous Head. In many ways it's a typical fairy-tale type of story... but since the main character is a talking head, well, it's not typical at all! The illustrations really help bring out the strangeness of it! 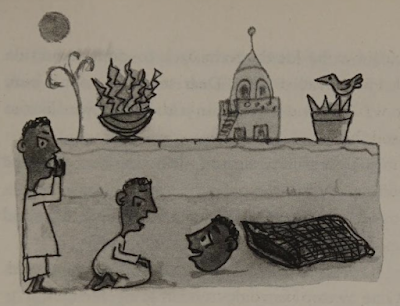 One last story: Slippery Hirsi and Crooked Kabaalaf, a story told to Laird by Osman Abdulahi Ahmed of the Culture Department in Jigjiga. It's about a sneaky merchant who cheats his customers, and another sneaky merchant who cheats his customers. You can probably guess what happens when they meet up with each other: very satisfying!
To finish up the post this week, here are some other books by Laird that I've featured previously at this blog:
When the World Began:
Stories Collected in Ethiopia
by Elizabeth Laird 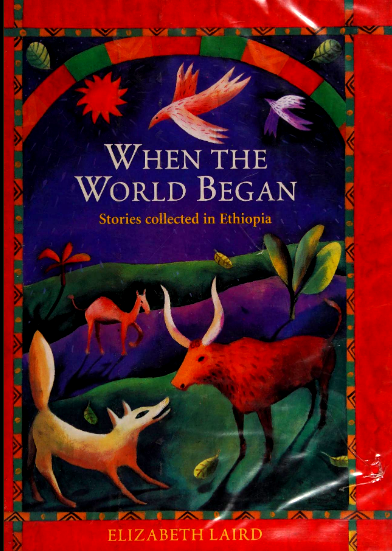 The Lure of the Honey Bird:
The Storytellers of Ethiopia 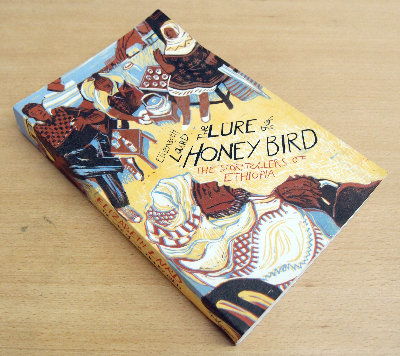 The Miracle Child: A Story from Ethiopia 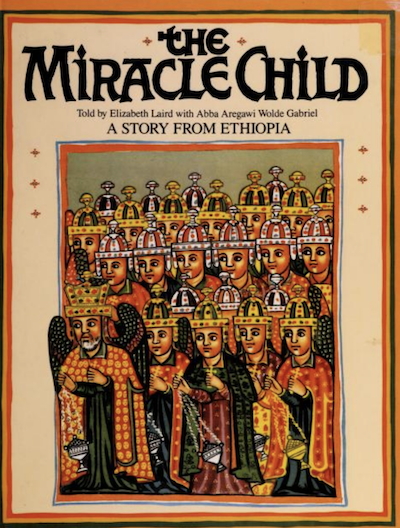 And for even more, check out her website! www.elizabethlaird.co.uk ... where you can also learn about her newest book, Stories of Peace and Kindness for a Better World: 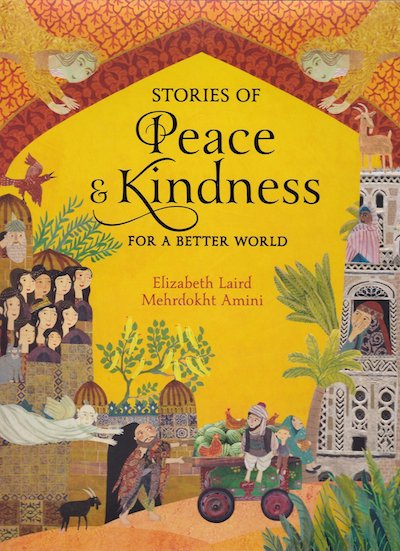 Meanwhile, jump in and enjoy these stories from the Somali region of Ethiopia; it's just a click away thanks to the Internet Archive!
The Ogress and the Snake,
and Other Stories from Somalia
by Elizabeth Laird 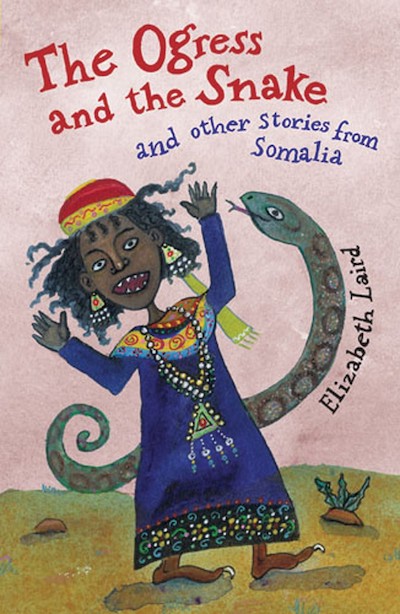